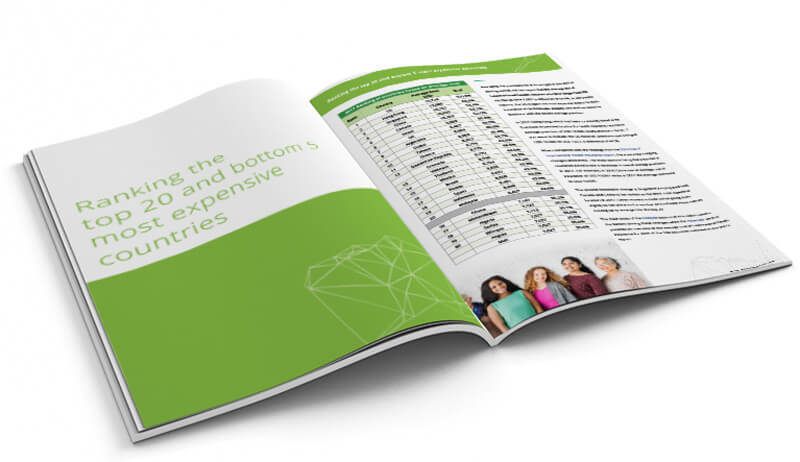 The 2017 edition of Pacific Prime’s Cost of Health Insurance report has been released. This 3rd annual edition of the report contains a whole host of valuable information related to the costs of international private medical insurance (IPMI). In particular, the report has some in depth information on the cost of such health insurance in Singapore, how the nation’s performance has compared to others in Asia, and why Singapore has moved up a spot in the rankings to now be the third most costly location for IPMI worldwide. We will provide an overview of the report’s findings below, as well as a link where you can download the report for your own perusal.

Before entering the specifics of the data within, it’s good to discuss the nature of the report itself. The report examines the cost of IPMI in 100 countries that are spread all across the world. It does this by analyzing the real prices of IPMI policies from ten different major international insurance companies. (Read the report to find out which ones.) What’s more, not only a single type of plan was used, but 3 different levels of coverage.

Also taken into consideration are the costs of plans for different demographics that make up each insurer’s client base. These demographic groups include single individuals, married couples, families of four, and retired couples. Considering all these various aspects of IPMI plans is necessary to give the clearest possible picture of the global cost of health insurance.

As you can see, the spread between these costs is very significant. As well, we can see that, on a per capita basis, the older the insured is, the higher the cost of insuring them.

Other interesting points from the report that are not reflected in the above table are as follows:

Find out more information about the global cost of health insurance, like an in depth analysis of the main drivers of premium increases over the past year, by downloading the report today.

Cost of health insurance in Singapore

It would have been prudent to discuss the 5 countries with the most expensive cost of health insurance in the previous section, but as it has special application to our analysis of Singapore’s health insurance costs, let’s take a look at it here:

If you are familiar with previous editions of the report, you may look at the first two countries listed and wonder if you were reading last year’s report. That’s because the United States and Hong Kong remain the number one and two most costly countries for IPMI, respectively. However, we do see a difference between last year and this year with regards to the third spot, as Singapore has managed to surpass China to enter the top three. So how did this happen?

One major factor that has sent tremors through the Singapore insurance market over the past year has been the introduction of MediShield Life. This new type of policy, which is not available to those in Singapore without citizenship or PR status, now requires that pre-existing conditions be covered. This requirement has lead to an increase in the utilization of the healthcare system by people with pre-existing conditions, which has subsequently raised medical costs due to the increase in demand. This has subsequently left insurers pushing to raise premiums in order to cover the costs of treating such conditions.

Another important reason for Singapore’s increase is the continuing issue of the “silver tsunami”, which is the effect that an ageing society is having on the city-state and its healthcare system. Much like the previous factor, this issue is putting more of a burden on the Singapore healthcare system every year. Also similarly to the MediShield Life factor, an aging Singapore leads to higher demand for healthcare, as older Singaporeans generally need medical assistance more often. This leads to higher medical costs, and insurers raise premiums to compensate.

There are actually two additional reasons that Pacific Prime sees explaining Singapore’s increase in the report ranking. Want to know what they are? Download the report today to find out.

There is potentially valuable information in the Cost of Health Insurance report 2017 that anyone with private health insurance in Singapore can use. This is especially true for expatriates living in the city-state, as they are more likely to possess the international private medical insurance that is specifically used in the report. If you are interested to get all of the details, be sure to download the report today. Just provide a few details and you will gain access to information on the cost of health insurance in 100 countries!

How to boost your mental health during the extended lockdown
Help! My health insurance premiums increased by 100%
The ins and outs of dental insurance in Singapore